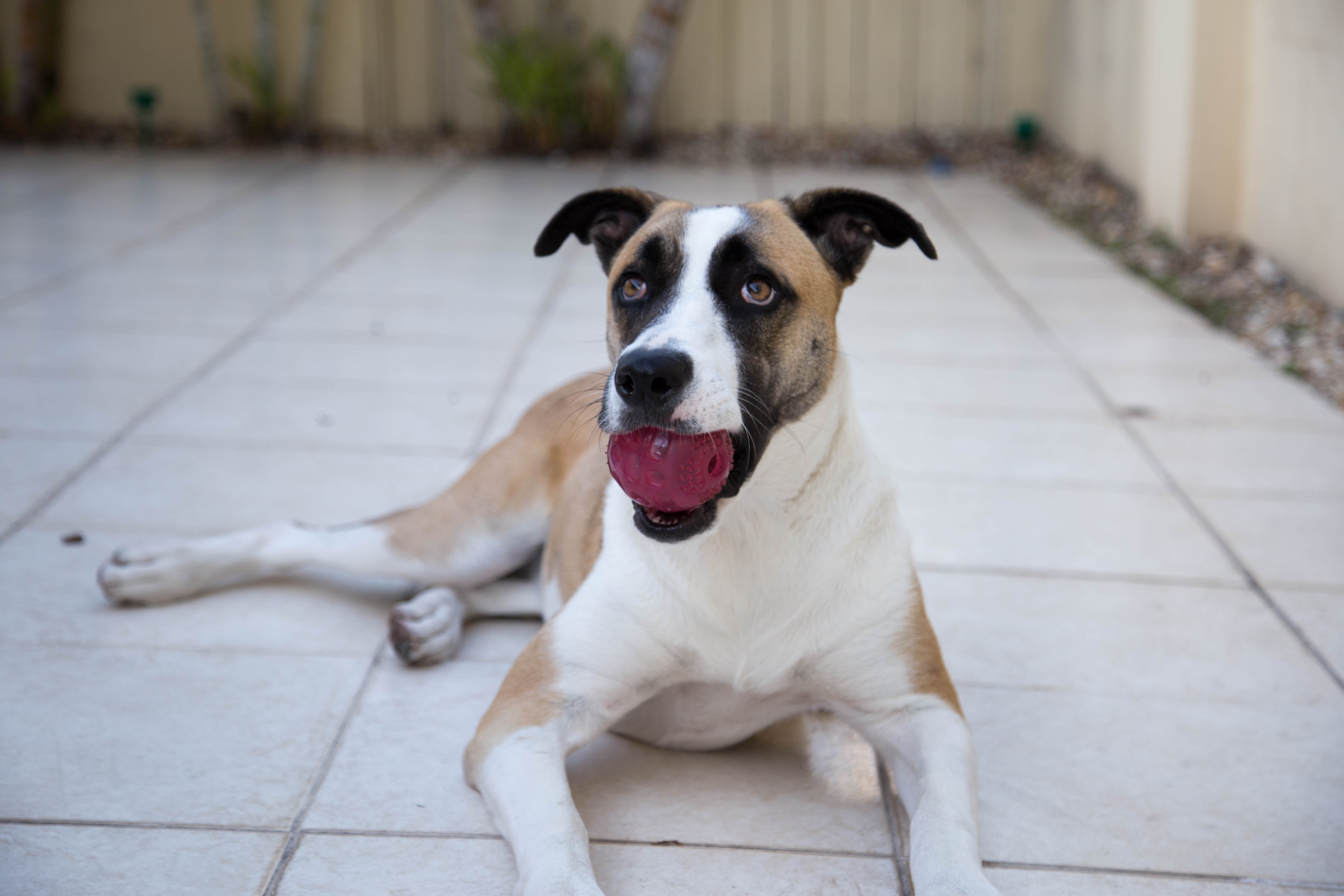 Writing this blog is hard. Although you may see cute photos and videos of our dog, Abby on social media, things weren’t always rosy in the Ruiz household. To be honest, adopting her was one of the biggest challenges I’ve ever dealt with.  It sounds dramatic but she cracked me open and forced me to deal with issues I never faced. It challenged me on multiple levels and it got to the point where I found myself crying in my car after trying to return her to The Humane Society because I had had enough. But I’m getting ahead of myself…

As long as I’ve known Alex he’s wanted a dog.  He grew up with a furry companion so for him it was just a natural part of life. I had a dog for all of 24 hours when I was 12 and that was my only experience with a pet. I wouldn’t consider myself to be a dog person but I was in love with the idea of having a dog. It’s part of the narrative fed to us by society of the things that complete a life. Kids and a house are high on that list but a dog/cat is a close second. Just notice how many commercials, ads, etc. contain a pet.  But I digress.

So since I was working from home and had a more flexible schedule, we thought it would be a perfect time to get a dog.  If I were directing this film called ‘My Life’ I would have cut the scene right there.  I had resigned from a desk job I held for 12 years and started a more flexible yet demanding new job and somehow thought this was a good time to get a pet. Maybe I should have waited a few months and got a full assessment of the situation? Nope! Not me. Full steam ahead, baby.

After much debate, researching, analyzing, and more debate, we decided to move forward. We knew that we wanted to rescue a dog because thousands of animals are surrendered or found each year in Miami-Dade County and most are put to death. So our weekends became a circus of driving from adoption site to adoption site looking for ‘the one.’   What made it even more challenging was the fact that we had adopted a dog about five years ago that wasn’t a good fit so we were overly cautious this time around (it’s a long, painful story).

As far as what we were looking for it was quite simple: 1-2 years old, medium size and not too hyper. We ended up one Saturday afternoon at a Petco that has a Miami Dade Animal Services outpost in the back of the store.  There was a room with all the larger dogs and there was Abby in the thick of things playing around.  She stood out because she was clearly the peacemaker wanting to play nice with all the other rough and tough doggies.   We asked to see her and she came out all timid and shy and really freaking cute. She was a stray they found a month prior and that was all the information they had on her.  We adopted her on the spot, bought some food and essentials and took her home.  Just like that, no instruction manual, no guidance, no health history. We learned afterwards that other organizations tend to keep the dogs long enough to give a full health history to prepare you better.

After a few days at home we discovered Abby had kennel cough, fleas, and parasites; on top of just having been spayed. The poor thing would just sleep all day. Once she recovered, we would notice that when we left her alone in the house in her crate, she would suffer from separation anxiety which would in turn give me anxiety. One day, she dragged the crate across the room and destroyed our bedroom comforter. I was shocked by her strength and freaked out that she wasn’t getting more comfortable being left alone. Although I was technically working from home, I was out of the house for long periods of time and it was getting increasingly harder to get her in the crate each time I had to leave.

After consulting with a dog trainer we tried to give positive reinforcements for her crate but the more she was left inside it, the less she wanted to be in it.  Then one day, I came home and she was staring out at me from the front door.  She had broken out of her crate and destroyed two of our rugs (defecated on one of them) and tried to claw her way outside of the front door.

I was at my wits end.  I couldn’t handle the stress.  I didn’t know what to do and I questioned whether or not I was even a dog person. I certainly wasn’t making the connection with this dog because Abby equated nothing but anxiety in my mind.  But it was more than that. This situation was challenging my ability to push through something that I didn’t have control over.  I’ve always been the Type-A that handled things and here I was coming undone because of a dog.  And it was bad, let me tell you. There were many conversations with friends and family searching for answers on what to do. Everyone told me to be patient and give it time but I was convinced that I couldn’t handle it. Which brings me back to me crying in the car having just tried to return Abby to The Humane Society. They asked me a bunch of questions and said that they would most likely put her down.  I obviously couldn’t allow that so we went back home.

Alex was the exact opposite of me with the situation. He loved Abby and it tore him apart at the thought of us having to give her away. And it tore me apart for hurting him, so we purchased a crate fit for a lion and decided to give it some more time. She hated being in the crate but at least we knew she couldn’t get out and potentially hurt herself.  I still struggled with the anxiety and stress but found other outlets to work through it, i.e. running and meditation.

Since she wasn’t a huge fan of the crate, I started to leave her alone in the house for a few minutes at a time while I walked around the block or ran a quick errand to see how she would react being left loose in the house. From what I could tell, she would stay at the door waiting for me to come back. And then one day, me and Abby had a standoff.  I was late for an appointment and she just refused to get in her crate.  I sat down with her and begged her to go in the crate and she just looked at me with her beautiful brown eyes just pleading with me to not force her in. So I didn’t.  I told her that I trusted her and hoped she wouldn’t destroy anything. I was gone for 3 hours and when I came back, not one thing was out of place. It was incredible. And ever since then we’ve left her loose in the house without an incident.

So it wasn’t the separation anxiety that was the worst for Abby it was the feeling of being trapped.  Which was exactly the same feeling I was experiencing with having to deal with the situation. We both didn’t know how to handle it so we acted out in our own ways.  But once we surrendered and trusted each other, we found peace.  She taught me to have more patience and I taught her how to be more independent.

I can honestly say that I’ve grown to love Abby in many ways. She’s such a sweet and patient dog.  Everyone who meets her comments on not only her beautiful markings but on her gentle eyes.  We call her the ‘Greeter of Seville’ because she wants to say hello to everyone. We’ve become a family and I’m so glad that I stuck it out. Alex says that the difference he’s seen in me with her is tremendous and I feel it. I suppose I am a dog person after all.

Here are five tips that I learned that will hopefully help you if/when you decide to adopt a pet:

Tip #1: Ask as many questions as possible at the adoption site.  See if you can play with the dog to get a good idea of their temperament. Observe them with other dogs.  Check the health history and if they are up to date on their shots.

Tip #2: Peanut butter in a Kong is a great positive reinforcement treat but go easy on the amount; too much of it can give a dog diarrhea.

Tip #3:  Most people have a similar story as mine of being stressed whenever getting a new pet.  I couldn’t believe how many people told me ‘been there, done that.’  Be prepared for sleepless nights and feeling over your head.

Tip #4: If your goal is to leave your dog loose in the house, start with 5-10 minute increments and slowly work up to an hour.  Usually if the dog is ok after an hour they can be trusted alone. However, keep them isolated to a certain room or space and don’t leave personal items that may get destroyed, i.e. shoes, clothes, etc.

Tip #5: A dog’s love is unconditional.  It’s just as scary for them to adapt as it is for you, so be patient. It’s definitely worth it.

Now it’s your turn…
Have you had a similar experience?  Are you thinking about adopting a pet? Do you have any reservations about rescuing a dog/cat? Let’s chat in the comments below.